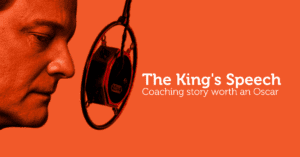 Most of you have probably watched the movie The King’s Speech. If not, we highly recommend it. It’s something that every single coach (and coach-to-be) absolutely must watch.

Geoffrey Rush (playing Lionel Louge, a speech therapist) uses coaching in treating the severe speech impediment of Colin Firth (playing King George V). In hard times, when the entire world is slowly slipping into war, the country needs a trustworthy and reliable king, a king that is able to keep the nation’s spirit up in the darkest of times. The stakes are very high.

As the King’s therapist, while working on his voice and speech, Lionel also pays focuses on his overall personality, especially deeply rooted beliefs that couldn’t have been changed by traditional means. Lionel’s method is extraordinary and as a coach he applies various methods to King George V’s impediment.

Insists on an authentic relationship

Lionel doesn’t allow the King’s role to fully determine the nature of their relationship. Lionel talks to him as an ordinary man, even referring to him as His Royal Highness Bertie. The roles we have in life provide us with a sense of identity that makes us feel safe and makes our world predictable. Increased identification with roles often makes personal change very difficult. It is the task of a coach to counter all the negative and limiting assumptions regarding roles in order to make the client behave differently than usual.

Lionel does not allow the king’s ego to interfere with his work with such a famous client. When he hears for the first time who his new client is, he hangs up quickly, insisting that even the Duke of York must come to his place and ask for help personally. A coachee has the full responsibility to initiate and maintain the contact with their coach.

Lionel has a positive attitude, constantly believes in change and strongly believes that the King is able to learn to speak properly. The coach believes in his client even when the client is not able to recognize his own potential.

Lionel involves the king’s entire body in the process, even asking George to roll around the floor, shake his body and thus release himself from his old patterns and beliefs. Bad habits are rooted in the body: playing, dancing and making your body move might lead you to uncover new possibilities.

Makes the client question himself

Lionel confronts George with the reality that his stammering may not be as unbeatable as he had always thought. Moments in which he discovers that he is even perfectly capable of reading Shakespeare fascinate him, as well as the moments in which Lionel makes him angry. These moments open new possibilities for him; they show him that permanent change is possible, and they strengthen his dedication to the entire process. When we detect cracks in our beliefs, we are then able to see and expand our expectations for building something new.

By insisting on George’s regular practice of new habits and behaviours, eccentric Lionel is pushing the King to do his part. Lionel knows from his experience what methods work and insists on the client’s contribution to the process. Practice is the essence of creating sustainable change and growth. Neuroplasticity enables change of even deeply rooted behavior and patterns of thinking. It’s all about practice.

After all, everything that we learn must be applied in practical experience. We’ll now quote Yoda, who says: ‘Do, or do not. There is no try.’ Putting things into practice is the moment when our desires and tendencies face reality…the moment in which the ideal confronts the real.

The final scene in which King George addresses the nation (a third of the world’s entire population at that time) is filled with tension, but the King’s capacity to surpass his old ways is also there, put to the test in one amazing moment.

There’s so much to be observed in this movie. If you’ve already seen it, watch it again with everything discussed here in mind. In case you haven’t seen it yet, make it a priority, as you’ll be able to detect coaching in it, even if the term ‘coaching’ didn’t exist at that time.

What things from this movie can be used in coaching approach? In what way can you become even more supportive to your conversational partner? Are you ready to make some large demands of your client regarding the conditions under which you will work with them in order to improve the quality of your coaching skills?

What are some of the elements of coaching that you detected in Lionel that you could use as well?

Read more about coaching in our previous blogs